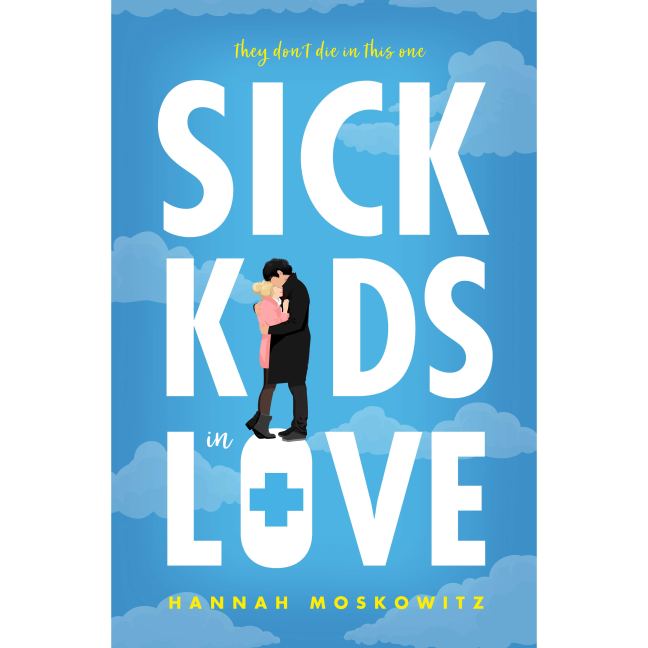 Friendship, love and perseverance!
Thanks to NetGalley and Entangled Teen for the opportunity to read and review Sick Kids in Love by Hannah Moskowitz!
Two teen main characters meet at the hospital while they’re getting treatments and they become immediate friends. Isabel has rheumatoid arthritis and Sasha has Gaucher Disease. Both illnesses have horrible consequences and daily struggles. Isabel and Sasha have such different personalities that they sometimes they struggle to get along, but mostly they are perfect for each other. I giggled many times while reading this book because of the humor, which is balanced out well with the tough reality of what Sasha and Isabel have to deal with on a daily basis because of their “invisible” sicknesses, their school lives and family dynamics. I’m impressed with this book, its maturity and realistic portrayal of what life deals out, 5 stars! 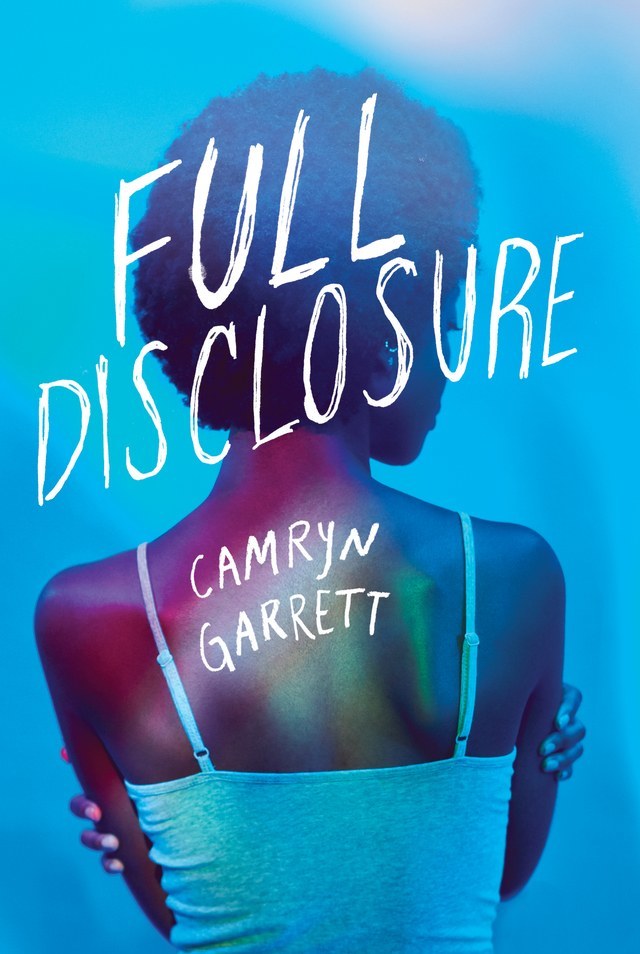 Full Disclosure by Camryn Garrett addresses several difficult topics with boldness and knowledge.  Simone was born HIV positive and she lives with her loving, adoptive parents, Dave and Paul, who she calls Dad and Pops. Simone recently moved to the school she’s now attending, after being tormented and shunned at her previous school when her best friend told everyone that Simone has HIV.  She wants a fresh start and her junior year is going well, at first.  She’s been assigned as the high school musical director for the school production of “Rent” because Broadway is one of her passions and her teacher believes she has what it takes to follow her dreams and make a career out of directing.  Simone meets this amazing guy, Miles, and they form a healthy relationship and she shares her secret with him.  Miles handles it kindly and with empathy and treats Simone the same as before.  Someone starts leaving threatening notes for Simone, warning her to break up with Miles or else.  Everything escalates after that and blow up.  Simone finds out who her true friends are and she has to decide whether to hold her head up high and persevere or run away from the same problem all over again.
Be aware that Full Disclosure freely talks about sexual issues and questions, so not for sexually squeamish readers.
Impressive and bold young adult debut!

An all-around good read!
Thanks to NetGalley and Entangled for the opportunity to read and review Spies, Lies, and Allies by Lisa Brown Roberts! Laurel wants to spend more time with her father, so she convinces him to let her work at his company for the summer. Her job is to monitor and assist five interns vying for a one hundred thousand dollar scholarship from Emergent, her father’s company. Laurel is also supposed to get to know the interns well enough that she can make the deciding vote for the scholarship. She’s anxious about her assistant position and she’s worried about what the interns will think of her. The summer job becomes more than she bargained for and turns into a roller coaster of events and stress for Laurel, the interns and the entire company. I enjoyed getting to know the characters, their differences and their complexities. This book contains adventure, intrigue, humor, loyalty, compassion and friendship. The added fun of fandom and Comic Con will make all nerdy readers giddy. The characters are relatable and show depth and Spies, Lies and Allies is an all-around good read- 5 stars!

Summers are supposed to be fun, right? Not mine. I’ve got a job at my dad’s company, which is sponsoring a college scholarship competition. I just found out that, in addition to my job assisting the competing interns, I’m supposed to vote for the winner. Totally not what I signed up for.

My boss is running the competition like it’s an episode of Survivor. Then there’s Carlos, who is, well, very distracting––in a good way. But I can’t even think about him like that because fraternizing on the job means instant disqualification for the intern involved.

As if that’s not enough, an anonymous informant with insider intel is trying to sabotage my dad’s company on social media…and I’m afraid it’s working.

Much as I’d love to quit, I can’t. Kristoffs Never Quit is our family motto. I just hope there’s more than one survivor by the end of this summer.

Award-winning romance author Lisa Brown Roberts still hasn’t recovered from the teenage catastrophes of tweezing off both eyebrows, or that time she crashed her car into a tree while trying to impress a guy. It’s no wonder she loves to write romantic comedies.

Lisa’s books have earned praise from Kirkus Reviews, Publishers Weekly, and the School Library Journal. She lives in Colorado with her family, in which pets outnumber people. Connect with Lisa at www.lisabrownroberts.com.

Excerpt from Spies, Lies, and Allies:

“Let’s see where helping me on my project falls on this list.” Carlos picks up a pen and clicks it, eyeing me from underneath ridiculously long lashes.

Cautiously, I take a tiny step toward his desk so I can read the list.

“Number three.” I point to the napkin. “Teamwork.”

He nods and underlines the word. I notice he’s added numbers six through ten. Nothing is written next to those numbers, except for ten, next to which he’s drawn a smiley face.

“What’s that for?” I point to the smiley face. He leans back in his desk chair and grins up at me.

My heart throbs in my chest and my imagination is off and running, fantasizing about number ten.

Carlos points to number five: nicknames. “I think this is where we left off at lunch.” He clicks his pen repeatedly and I resist the urge to snatch it out of his hand. “I’d prefer not to be nicknamed for a pasta, but I gave you a cereal nickname, so…” He shrugs but keeps his eyes on mine.

He bites his bottom lip, and I have no trouble picturing what will make me “smiley face” if we ever make it to number ten. Also, I’m pretty sure he’s a mind reader because his gaze drifts down to my lips, then back up to my eyes.

“The Manicotti. Who is it?” He glances across the room. “Elijah? He can be sort of cheesy.”

My mind analyzes his words, sliding them around like one of those puzzles where you have to move a string through twisted metal. And then it clicks.

“You read my notebook! You’re the one who—” Panic zings through me as I remember what I wrote about him, Carlos is trouble, and his editorial comment, True. Is Carlos adorable?

Apparently I’m not the only spy around here.

“Why’d you pick this desk?” I’m desperate to change the subject.

“But it’s better by the windows.”

“Depends on which view we’re talking about.” He gives me a cryptic smile, one that makes my stomach dip. “Anyway, I saved your notebook. You’re lucky no one else read your notes.”

Mortified and defiant, I cross my arms over my chest. “You didn’t have to read it. You could’ve just returned it.”

“I was just checking to make sure you’d listed all of Mr. Mantoni’s rules.”

Across the room, Elijah stands up and stretches. He glances at us, an amused smirk twisting his lips like he knows something I don’t.

His responding grin packs more heat than it should.

“I think we’ve gone off track.” I’m proud of how calm I sound, even though my nerve endings are exploding like firecrackers. 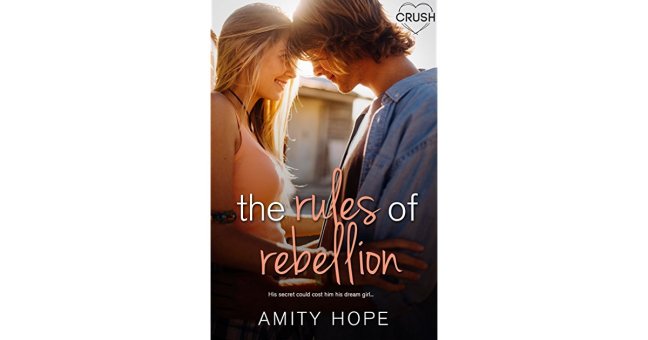 Thanks to NetGalley and Entangled Publishing for the opportunity to read and review The Rules of Rebellion by Amity Hope. Kylie gets teased by her younger sister, Allie, because of her complete lack of social fun, so Kylie decides to make a rebellion list of things she can do to expand her high school social experience. Kylie’s rebellion list contains rules also, such as attend a party (without drinking). With Kylie’s list and the help from her friend Leo, the adventures begin. This story turned out to be more complex than I expected and the foreshadowing was subtle and perfect. Kylie’s group of friends are supportive and fun and I enjoyed the prank that Leo planned for her list. Rules of Rebellion is a fun teen romance with the added maturity that makes it a perfect young adult realistic fiction book! Very adorable and worth 5 stars!

Thanks to NetGalley and Bloomsbury for the opportunity to read and review Letters to the Lost by Brigid Kemmerer! Two teens that have each lost someone they love begin an ongoing anonymous conversation by adding to a letter left and then found next to a cemetery headstone. The conversation moves to email for convenience and these two strangers help each other grieve. Declan has lost his sister and his father is in prison and no longer part of their family. His mother has married Alan, who isn’t the nicest to Declan. Juliet has lost her journalist mother in a hit and run car accident and she lives with her father. Declan has an amazing best friend, Rev, that’s dealing with his own traumatic past and Juliet’s best friend, Rowan, is supportive and caring. The email relationship remains anonymous and grows deeper and more meaningful as their grief is dealt with together. Letters to the Lost melted my heart with the complicated storyline and endearing, real characters. I love everything about this story, from the caring, helpful teachers to the awkward friends to the dysfunctional family members. All of these components create a beautiful realistic fiction novel worth 5 stars!

Thanks to NetGalley and Simon Pulse for the opportunity to read and review When Dimple Met Rishi by Sandhya Menon! Prejudice and pushy parents are a part of every culture and Dimple is tired of her parents shoving the culture of India down her throat when she just wants to be a young adult American. Her dream is to become a web developer. she’ll be attending Stanford in the fall but for the summer she’s attending Insomnia Con-six weeks of learning web design and development. Little does she know that her parents have prearranged a meeting with the young man they want her to eventually marry, Rishi. She knows nothing about Rishi and her parents kept her in the dark while Rishi’s parents told him everything. Rishi doesn’t realize that Dimple has no idea before it’s too late and they have a disastrous first meeting. They end up being partners for Insomnia Con and get the chance to know each other without the pressure from their parents. Dimple and Rishi have more in common than they could have guessed and they end up being very compatible. I think it’s creative and funny how they dubbed the small group of rude, arrogant rich kids, The Aberzombies and it made me smile every time it was mentioned in the book. The story of Dimple and Rishi is fun, eye-opening, romantic, full of friendship and loyalty, inspiring and, at times, heartbreaking. Beautifully written, entertaining and worth 5 stars!