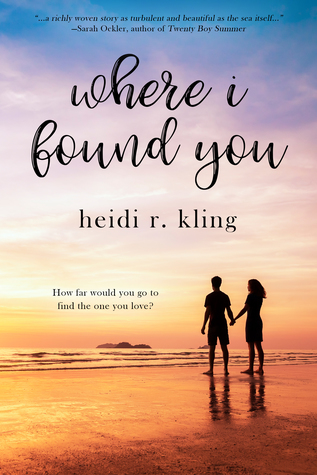 Thanks to NetGalley and Entangled Publishing for the opportunity to read and review Where I Found You by Heidi R. Kling. Sienna is still reeling from her mother’s disappearance that occurred five years ago. Her father is trying to move forward, but still honor his lost wife at the same time. It’s assumed that she went down in a plane crash over the Indian Ocean. Sienna reluctantly agrees to go with her father to a community across the world in Indonesia that has been struck by a Tsunami which caused disaster. While there, Sienna’s eyes are opened and her empathy for those who have suffered through the Tsunami and lost so much overcomes her own feelings of loss. She meets and helps several people and gains a close, wonderful relationship with a young man named Reni. She discovers that Reni is searching for his father and she does everything she can to help him. This touching, beautiful realistic fiction story opened my eyes to the horrible tragedy and suffering of the Tsunami victims, many things I had never thought about or heard of. I enjoyed learning about another culture also. I’m anxiously awaiting the sequel!!! 5 stars.

Actual rating: 3.5 stars. Thanks to NetGalley and Clarion Books for the arc of Black River Falls by Jeff Hirsch! A quarantine due to the virus called Lassiter’s has occurred. Lassiter’s is short for Lassiter’s Viral-Induced Retrograde Amnesia. The virus hit on October 16th, when people of all ages lost their memories and couldn’t even remember their families. Narrated by Cardinal Cassidy, Cardinal tells the story as if he’s writing/talking to his brother. Cardinal hasn’t contracted the virus and therefore, hasn’t lost his memory. He meets his mom in town, but she doesn’t seem to recognize him and she is living with a man that is not Cardinal’s father. He rescues a young woman from men pretending to be her husband and friend (a scheme men have thought up to capture women). The secret of the virus’ origins is revealed to Cardinal and he has the choice of revealing it to Dr. Lassiter and helping find the cure or ignoring the information and going on with life as it is right now. Sci-fi and dystopian fans will enjoy this book with the clever world building and character development.

The Dead of Winter, by Kresley Cole, left me hanging and in anxious anticipation of the fourth book in The Arcana Chronicles! The book begins with Evie leaving Death (Aric) to save Jack from the torturous twins. She makes more allies and, eventually, Death visits their camp. Together they are able to rescue Jack after some intense action and cooperation. The twins have taken Selena, the Archer, and Evie, Jack and Death work together to try to save her from the sadistic and twisted twins. Evie finally makes a choice between Death and Jack before an attack occurs and the book ends with no publication date specified for the fourth book-AAAHHH!

I absolutely love the variety of languages, the humor, the dynamics of the characters and the amount of complexity of each character – a perfect amount – and the fact that no character in this series is static!

I am loving the Arcana Chronicles series! The second book, Endless Knight, begins right where Poison Princess left off – when Evie transformed into the Empress to save her life through self-defense and Jackson saw her with all of her powers. Jackson states that he doesn’t want to be with the Arcana; he says they aren’t right. Evie, Selena, Finn and Matthew continue to meet more Arcana and make truces with some. Jack and Evie work through their differences and overcome their problems. Death kidnaps Evie and stunts her powers. The more she gets to know death, the more she understands him and cares for him. Then Matthew tells Evie that Jack has been captured by twin Arcana who enjoy torturing their victims, so now Evie must choose between Jack or Death. Wow! I love this book and I am excited to continue reading with the third book, Dead of Winter. Great characters, interesting surroundings, lots of action and adventure, dynamic relationships and romance make this a fun series to read!

Thanks to NetGalley and Simon & Schuster for the arc of The Last Boy and Girl in the World. This story revolves around the analysis of Keeley and her relationship with those around her just as much as it deals with the man-made and natural disasters of her town. This intriguing balance kept my interest because the characters were dealing with more than just their own relationships. They were all trying to decide whether to evacuate or stay in the small town that was becoming more flooded by the day. Keeley learns a lot about herself along the way and she loses friends and gains others. She also matures, even though it is a huge struggle for her. The community emergency brings out the best and worst in the town’s residents and also brings to light people’s true characters. A realistic fiction book that will make readers smile and cringe and will ultimately pull on their heartstrings.