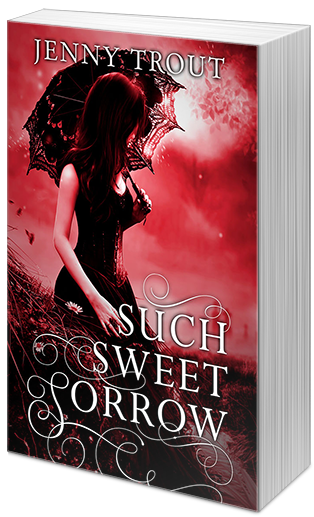 Thanks to NetGalley and Entangled Publishing for the free digital book of Such Sweet Sorrow by Jenny Trout! I was instantly intrigued by the story in the prologue because I knew I would be discovering what happens after Shakespeare’s Romeo and Juliet ends. Then, the first chapter brings Hamlet into the after mix and his story begins where Shakespeare’s Hamlet left off. I was pulled in even more! Romeo and Hamlet travel through Valhalla to try to complete their individual missions and they deal with love, battles, intense warriors and extreme conditions. This story is cleverly written and imagined and it is also complete fun! I give it 5 stars!

Thanks to NetGalley and Entangled Publishing for the digital book of Paint My Body Red by Heidi R. Kling! This story involves a depressed main character, Paige, who is dealing with something terrible (the reader has to wait to find out all of the details) and she is leaving her mother to visit her sick father that she hasn’t seen in a long time. Paige arrives in Wyoming and sees how much her father has deteriorated. While confronting this trauma and comforting her father the best way she can, she renews her friendship with Jake, a ranch hand that used to be her close friend when they were younger. The mystery of past events becomes revealed a snippet at a time, as the story is told in parts of then and now and goes from tragic sadness to heartwarming happiness. The complex story flows well and the author bring the characters alive, which helps the reader relate to and gain empathy for them. I give Paint My Body Red 5 stars because Heidi R. Kling pulled all the aspects of this complicated story together cohesively and kept it riveting!

Thanks to NetGalley and Houghton Mifflin Harcourt for the arc of Wax by Gina Damico! This story has a slow beginning that describes a very embarrassing event that happened to Poppy, the main character. It took until page 60 to pique my interest, but then the mystery begins! I enjoyed the humor surrounding the characters and the development of the characters. Poppy becomes allies with her biggest bully as they discover secrets that were meant to stay hidden. The mystery brings a legend to life and Poppy needs all the help she can get. Not as creepy or suspenseful as I thought it was going to be or would have liked it to be, so I rate it 3.5 stars for a fun, twisted read.

Thanks to NetGalley and Entangled Publishing for the arc of Daring the Bad Boy by Monica Murphy! This cute romantic story is about two unsure teenagers meeting at summer camp and eventually becoming friends. These two help each other overcome hurdles in their lives and conquer their fears. I didn’t feel completely drawn into the story, but I did enjoy it, so I rate it 3.5 stars.

Thanks to NetGalley and Entangled Publishing for the digital book Olivia Twisted by Vivi Barnes! Olivia is taken to another new foster home where she attends another new school and meets more new classmates. She wants to float through until she graduates, but then she becomes involved with computer hackers and discovers more than she wants to know, but she also finds family that she didn’t know existed. The characters are complex and the retelling of Oliver Twist is intriguing and well done!

Thanks to NetGalley and Amulet Books for the sneak peek of YA books heading our way!

Samples include: The Haters by Jesse Andrews (author of Me, Earl and the Dying Girl); Seven Ways We Lie (a snippet of teen angst); The Romantics (broken heart and broken family); The Movie Version (Amelia and her life); The Graces (a family of witches); Maresi (a story with nuns); Every Falling Star (Korean historical fiction).

The excerpts are very small, especially in comparison to Buzz Books for Young Adults Fall 2016, so the story is not completely represented. My favorite samples are The Graces and Every Falling Star. I will definitely check into these stories more! 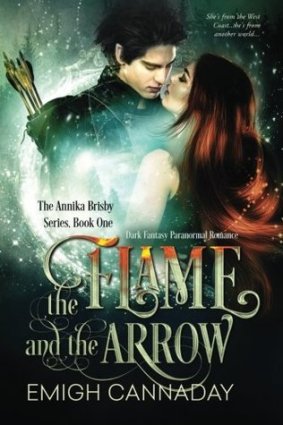 Thank you to Emigh Cannaday for the opportunity to read and review her book, The Flame and the Arrow! This new adult book begins with Annika, a musician who has recently broken up with her fiance and she is talking to her best friend, James, about the events in her life. Annika travels to her Uncle Vince’s home in Bulgaria for a well-deserved respite and to recover from the breakup. She goes for a hike in the wilderness and loses her way back to Uncle Vince’s home. She eventually sees a person and that person is someone she met in town earlier. Annika follows her and they end up in a cave with two other women. Things become strange as they are transported to a different world through a portal, which then closes. The three women reveal that they are wood nymphs and inform Annika that she is one too. She resides with an elven family after the portal has closed and everyone suspects that she belongs in their world. Finn and his father, Ambrose, show Annika the family tree and she discovers that she is part of their world through her mother’s ancestors. Annika begins to have a tumultuous relationship with Talvi, Finn’s brother. The family puts together a group that will be battle ready to find and rescue a member of the family that has been kidnapped, another interesting part of this story. Annika falls in love, learns a lot about herself and becomes somewhat transformed. The writing flows, character development is strong and the story and worlds are elaborate and interesting. The Flame and the Arrow is the beginning of a new adult series about Annika and her life entangled in mystery, intrigue, complicated relationships and romance!

I am proud to be a part of the 2016 NetGalley Challenge and I help books succeed!