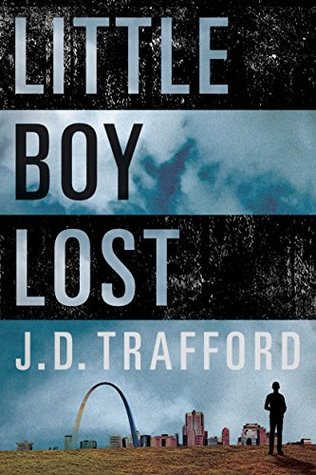 Little Boy Lost by J. D. Trafford tells the story of a lawyer, Justin Glass, who is down on his luck, gets a visit from a young girl looking for her missing brother, willing to pay for his help with a jar full of change. He asks around and eventually discovers that the missing brother is part of a mass grave full of many murdered young men. All of the victims were criminals in one way or another and the perpetrator seems like he could be some sort of vigilante. In the meantime, Justin gets an awesome paralegal, Emma. She’s from Bosnia and was a certified lawyer there. Since she knows about the legal system, she gets Justin and his office in tip top shape.
While helping with this case, he’s dealing with being a single parent and feeling helpless when he discovers that his daughter is being bullied. Dealing with the murder case, he seems to be doing more investigating than the law enforcement is. With the help of his paralegal and her close-by relatives, Justin Glass is able to solve the mystery but this puts his life in danger also. A strong cast of characters and a suspenseful mystery that tugs at the heartstrings, 4 stars!