The Suffering by Rin Chupeco is the sequel to Girl From the Well. Tark and Okiku work together as a vigilante team ridding the world of murderers. They have to enter the Japanese forest that’s known for people committing suicide within its borders. Kagura is missing, so Callie, Tark and Okiku venture into the forest to find her and the American ghost hunting TV crew she went with. They were searching for a village that supposedly exists but no one has discovered it. The search party discovers horrific rituals and sacrifices that the village leader tricked the citizens into believing were helpful to the village, but the leader was sacrificing young women for personal power and to open Hell’s gates. Callie and Tark get split up and Tark encounters terrible, vengeful, angry spirits, members of the missing TV crew and eventually he finds Kagura. Together, Okiku, Tark and Kagura fight the spirit of the evil leader and try to appease the tortured spirits. Danger, suspense and creepiness made me want to read nonstop, 5 stars for this haunted sequel! 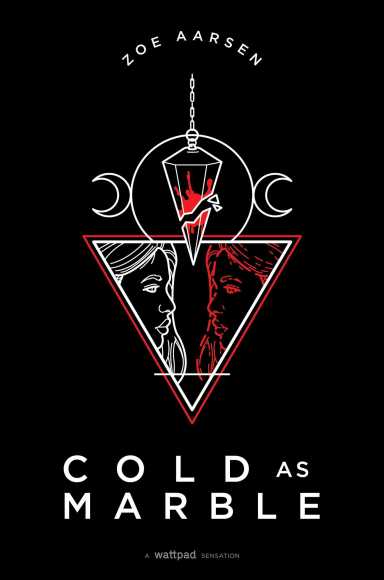 Sequel to Light as a Feather!
Thanks to NetGalley, Edelweiss and Simon and Schuster Children’s Publishing for the opportunity to read and review Cold As a Marble by Zoe Aarssen, the sequel to Light As a Feather.
McKenna and her friends’ lives were completely disrupted in the first book. Two out of their friend group died, Olivia and Candace, and they believe both deaths were caused by Violet, the new girl who insisted they play the game Light As a Feather. During the game, Violet described their deaths and McKenna accused Violet of killing her friends. A restraining order was placed on McKenna and she was sent away to a different school. She’s home for Christmas and more teenage girls are dying. McKenna, her neighbor and boyfriend Trey, and Olivia’s brother Henry diligently work together to stop Violet and the curse she’s helping along. Suspenseful and interesting adventures and actions that the three dive into cause stress and more problems in their personal lives than helping stop the curse. I liked this sequel better than the first book in this series because it was faster paced and had more character development. Spooky, dangerously fun read for young adults! 4 stars! 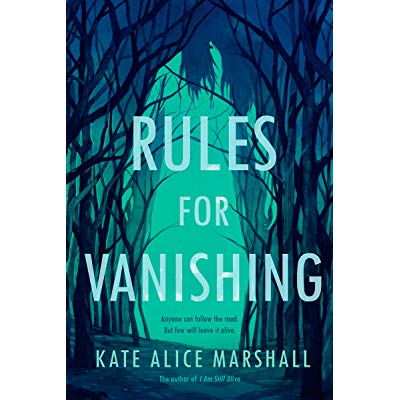 Illusions or truth?
Thanks to Edelweiss and Bookish First for the opportunity to read and review an advance reader copy of Rules for Vanishing by Kate Alice Marshall!
The synopsis thrilled me with promises of haunted mysteries and horrific obstacles to come as Sara searches for her missing sister, Becca. It all begins with a text to Briar Glen High students about a game they can play, the same game Lucy went to play. The book contains case files, text messages, group messages and historical accounts of what happened to Lucy all those years ago. The story builds anticipation for the anniversary of Lucy’s disappearance, the search Sara and her friends are going to make and the game they are preparing for. They are all worried for Sara’s mental health and don’t want her to be alone as she searches the woods for Becca, her missing sister. Sara’s friends meet at the designated area just before midnight on the anniversary of the disappearance and Sara shows up on her own. She believes that they all broke the rules. The group of teenagers doesn’t realize the true dangers that are in their near future as the supernatural takes over. Death, confusion, memory loss and a demon await! Spooky horror story worth 4 stars!

Creepy fun! I thoroughly enjoyed Dreaming Darkly by Caitlin Kittredge!
Ivy’s mother recently committed suicide, so she’s going to live on the island of Darkhaven with her Uncle Simon and his housekeeper. Ivy soon learns about the Bloodgood family curse from the only other people living on the island, the Ramsey family. Veronica, the housekeeper, later explains the curse to Ivy. Uncle Simon also tells Ivy about the murders her great grandfather committed. He killed an entire household leaving only one Ramsey family member alive and then his twelve-year-old daughter walked in and saw him covered in blood. Supposedly this curse makes people crazy. Ivy does make a few friends and school isn’t too bad but living in the manor becomes stranger and scarier. Ivy sees skeletons, ghosts and finds a body covered in blood. She almost falls off the cliff but Doyle Ramsey happens to wake her just in time from her sleep walking. I would have liked a little more information about Ivy’s parents and the relationship they had but Dreaming Darkly is spooky fun with all the suspense and creepiness needed to make an edge-of-your-seat read, 5 stars!

A haunting that just won’t stop!
Thanks to Entangled Teen and NetGalley for the opportunity to read and review 8 Souls by Rachel Rust!
Spooky and ominous from the beginning; I was instantly hooked! Mysterious and recurring dreams about a house haunt Chessie; they have since she was little. These dreams were part of her life, to the point that she drew the house for her elementary teacher after she gave the students the assignment of drawing their dream house. Little does she know that Chessie dreams of a house where murders were committed over a century before. When Chessie draws her dream house scene, the teacher is worried and notifies her parents. She then ends up being sent to a psychiatrist. Ever since then, Chessie keeps her dreams to herself, even when she’s hearing voices. She finally confides in someone else and the two of them share the struggle of solving the haunting. 8 Souls is well-written, contains awesome characters and a haunting that won’t stop until justice is complete; 5 spooky stars! 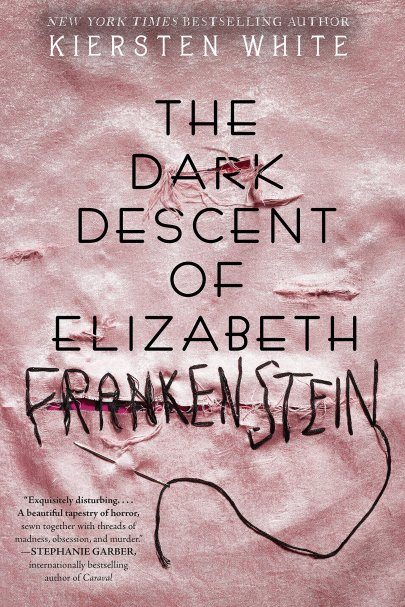 Introspective retelling!
Thanks to NetGalley and Delacorte Press for the opportunity to read and review The Dark Descent of Elizabeth Frankenstein by Kiersten White!
The Dark Descent of Elizabeth Frankenstein is a fresh and unique retelling of Mary Shelley’s classic story. I love the female protagonist, Elizabeth. Her background has been lonely and she’s always struggling to secure her place in the world, much like women of the time period the story takes place in. The mystery intrigued me and after Elizabeth’s background was set, the action and mystery picked up the story’s pace. Tragedy seems to strike all too often around the Frankenstein manor where Elizabeth was taken in as a young girl. Her favorite companion has always been Victor Frankenstein and he claims ownership and complete companionship of Elizabeth. The story becomes darker as it progresses, which makes it even more interesting to read. Historical fiction, horror, and a retelling earn 5 stars! Kudos to Kiersten White for her remarkable retelling!

Perfectly spooky!
Thanks to Bookish First for choosing me as a winner of The Haunted by Danielle Vega!
Hendricks and her family moved to a small town and into a house with history after some undisclosed problems in Philadelphia. The house they moved into is known as the Steele House. This is where a girl was murdered years ago. Hendricks begins to have hallucinations that terrify her. She also discovers tragic things about her neighbor’s past and deals with PTSD ex-boyfriend issues. On the upside, Hendricks makes friends and begins to enjoy her new home but not necessarily the house. Her friends are fun and make her laugh and enjoy life again. But when she’s home, strange and terrifying things happen. A perfectly spooky young adult horror book that gave me chills! The mystery surrounding the house and also Hendricks’ past kept the story interesting and suspenseful, 5 stars for this creepy tale!

Mutating virus on the rampage!
Thanks to Edelweiss, NetGalley and Sourcebooks Fire for the opportunity to read and review Plague Land by Alex Scarrow.
A fast-moving, fast-killing virus is spreading across the globe while some governments are hiding the fact and scientists are scurrying to understand and overcome the virus. Leon, his sister and mother are traveling by train to his grandparents’ house when the virus hits. Several people on the train are infected and die, so when daylight comes, they travel outdoors and watch for the telltale flakes of the virus. Two of their group get touched by the virus and by the time they reach a barn for shelter, they show signs of the virus and die in front of their eyes. The virus continues to evolve and grow into larger organisms that fight even harder for survival. The author creates intense imagery and a frightening sense of loneliness and destruction. Creepy dystopian, 4 stars!

Light As a Feather by Zoe Aarsen published by Simon & Schuster Teen.
A group of junior girls attend a birthday party and things turn strange when the new girl describes the birthday girl’s death. They take turns, each listening to their own deaths. All of them except McKenna. Violet said that she can only sense fire but nothing else, when it comes to McKenna. McKenna’s sister, Jennie, died in their house fire years earlier. Horrible things start happening and the friends are freaking out. They decide they will do whatever it takes to stop Violet. Spooky and interesting, this story is a perfect young adult Halloween read, 5 stars!