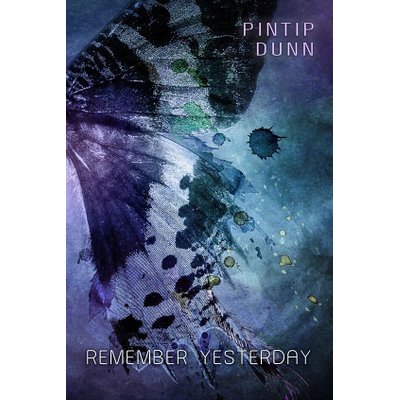 Thanks to Entangled Publishing for the advanced reading copy of Remember Yesterday by Pintip Dunn! The cover is even more beautiful than Forget Tomorrow’s cover. I posted my Forget Tomorrow review on October 2, 2016.

Jessa’s point of view ten years after Forget Tomorrow. Jessa has been living in the Harmony compound with Logan’s older brother, Mikey, along with Angela and Ryder. Mikey convinced Angela to marry him after Callie proved that the future can be changed. After they were married, they adopted Ryder and took care of Jessa as their own also, since her mother feels the need to stay at home just in case her husband returns from his time travels. Olivia was found to be the precognitive that the community was looking for and she hasn’t been seen in over a decade, since her abilities were discovered.

The suspense, mystery and emotional turmoil are pumped up in this sequel to Forget Tomorrow, which makes it a more interesting story. Remember Yesterday brings to life more characters and I felt their struggles while reading. I hope there is a third book to this series! My rating: a solid 5 stars!

Check Out This Teaser from Remember Yesterday

Sixteen-year-old Jessa Stone is the most valuable citizen in Eden City. Her psychic abilities could lead to significant scientific discoveries, if only she’d let TechRA study her. But ten years ago, the scientists kidnapped and experimented on her, leading to severe ramifications for her sister, Callie. She’d much rather break into their labs and sabotage their research—starting with Tanner Callahan, budding scientist and the boy she loathes most at school.

The past isn’t what she assumed, though—and neither is Tanner. He’s not the arrogant jerk she thought he was. And his research opens the door to the possibility that Jessa can rectify a fatal mistake made ten years earlier. She’ll do anything to change the past and save her sister—even if it means teaming up with the enemy she swore to defeat.

Pintip is represented by literary agent Beth Miller of Writers House. Her debut novel, FORGET TOMORROW, won the RWA RITA® for Best First Book. Her other novels include THE DARKEST LIE and the forthcoming REMEMBER YESTERDAY.

She lives with her husband and children in Maryland. You can learn more about Pintip and her books at www.pintipdunn.com

I lift my eyes to meet his, and I reach into the future—his future. The vision pours into me. The future Tanner grabs me and kisses me. Without warning, without hesitation. It is hot and searing and exquisite. And I like it. Oh, how I like it.

“No!” I fall out of the vision and scoot away from him, so far that I approach the edge of the platform. My pulse is thundering; my nerves are jumping. Oh, Fates. What’s wrong with me? Is it because I don’t want him to kiss me? Or because I want it too much?

His eyes turn watchful. “Come back here, Jessa. You’re too close to the sky.”

I look into the open space, fluffy with wads of cotton-ball clouds. I take a breath, hoping to inhale some of the sky’s serenity. He doesn’t know about the kiss. Why would he? In the vision, he acted impulsively, without premeditation. The desire to kiss me hasn’t arisen in him yet. Maybe I can prevent it from cropping up altogether.

“Look, you don’t want to kiss me,” I babble, staying where I am. And hope I sound more reasonable than I feel. “It’s only because we talked about kissing the other day. When you talk about something, you give it life. Make it real. Like an annoying song you can’t get out of your head.”

He creeps toward me, his eyes flicking between my face and the sky. “So you can’t get the idea of kissing me out of your head?”

“I said it was annoying. Like a song. Not based on anything real.”

He stops five feet from the edge of the platform. “So let me get this straight. You saw into the future and we kissed. Right?”

“Y-yes,” I stutter, shocked that he guessed the truth so easily. “But it doesn’t have to happen that way,” I add quickly. “As my sister proved, we’re in control of our own fate. We can make any future we wish.”

“Unless this is our Fixed.” His voice is low, rough. And yet, every syllable imprints into my memory forever. “Unless this kiss is so important, it happens in every one of our worlds.”

“It’s just a kiss. How can it be that important?”

His eyes glitter with the challenge. With one last look at the platform’s edge, he crawls to me, slowly but steadily. “The path of our particular world might depend on this kiss. Would you risk our future just to be stubborn?”

And then, he’s right in front of me. He rests his hands lightly on my back. They slide down to my waist, until his fingers brush against the strip of bare skin between my pants and top. I shiver, and my skin pebbles into a million goose bumps. He pulls me against him. So much of my body is touching his that I can’t think; I can’t breathe. All I can do is feel. His trembling breath. My hammering heart. His shaking hands—or hell, maybe that’s me, vibrating against his touch.

Our lips are inches apart. Time blends together. You couldn’t move me from this spot if the world were crashing down around us.

“I thought I wasn’t your type,” I whisper.

“You’re not,” he says. “But for the fate of our world, I’m willing to make the sacrifice.”

And then, he closes the gap between us.

My 5 Favorite Passages in REMEMBER YESTERDAY

I had such a blast writing this book, not only because I had a chance to revisit all of my favorite characters from FORGET TOMORROW, but also because I got to explore little Jessa’s story, who is now sixteen.

Jessa was such a fascinating character for me to write. She’s grown up with a tremendous amount of guilt over her sister’s sacrifice, and I loved seeing how she forges her own path from underneath her sister’s shadow. Oh, and she also has a swoony relationship, with Tanner, who might just be my favorite hero.

I’d love to share with you my five favorite passages from REMEMBER YESTERDAY (without giving away any spoilers!)

A weariness descends on me, one that goes beyond my bones to the molecules themselves. Maybe it’s from the infection. More likely, it’s from this guilt I’ve been lugging around like the hydration packs seen into my hoverjerseys. She’s right. This is who I am.

Poor Jessa! This is the crux of her struggle. It is a different battle than the one her sister Callie fought in FORGET TOMOMRROW, but in my mind, it is just as worthy. I still can’t decide which battle I think is more difficult!

Oh, good Fates. Was I actually checking out Tanner Callahan? What in Limbo is the matter with me?

This passage just makes me smile. Jessa is so determined to keep this scientist-boy at arm’s length because of her deep-seated hatred of the scientists. Little does she know just how impossible this task will turn out to be…

“I thought I wasn’t your type,” I whisper.

“You’re not,” he says. “But for the fate of our world, I’m willing to make sacrifice.”

I adore this quote! Not only does it display Tanner in all of his arrogance, but it also showcases the themes of fate and determinism that is so central in this series.

I promised no spoilers, so I will just say that the “large man” referenced here is one of my favorite secondary characters from FORGET TOMORROW — Zed. I’ll also say that in this series, every vision of the future that the characters receive will be played out, in one way or the other, before the series’ end.

Ah, here’s the reason for the book cover, which features those gorgeous butterfly wings! The books in this series deal a lot with time and time travel, and what this quote gets at is the idea that a single, tiny action can change…everything. We get a glimpse of this idea in FORGET TOMORROW, but it is explored in much more depth in REMEMBER YESTERDAY. I find this concept endlessly fascinating.

After earning degrees from prestigious universities, what path did you travel to become an author?

After earning degrees from prestigious universities, what path did you travel to become an author? I’ve wanted to be an author since I was six years old, but I wrote my first novel after college, while I was working at my first job as a business analyst. This was perhaps the happiest six months of my life, although I’m not sure if that book even had a plot! I went to law school soon after that, although I still cling to my dreams of writing. I graduated law school and then worked as a litigation attorney at a corporate law firm. I wrote my second and third novel during this time. I left the legal profession when I had kids, and for three years, I was a stay-at-home mom. Almost seven years ago, I started writing again. I signed my first contract five years later and then proceeded to sell seven books in the next seven months.

The idea of a future memory can be quite confusing, but you pull it off well and make it completely understandable.  How did you come up with this idea for your books?

I had been writing seriously for years and was getting frustrated with the publication process, namely the rejections. My editor friend send to me: “I wish I had a crystal ball. Then, I could tell you five years from now, you will definitely be published and you wouldn’t worry about it so much.”

A few days later, I was taking a nap with my toddler son and in that hazy state between being sleep and awake. “Wouldn’t it be great,” I thought, “if we could send memories to our younger selves? Then I could see myself as a successful author and know that all this sweat and blood and tears were worth it.” My next thought was: “Hey, that would make a great idea for a book!” And presto: the Forget Tomorrow series was born.

What advice would you give to aspiring writers?

Thank you, Pintip and good luck with your series, Forget Tomorrow!