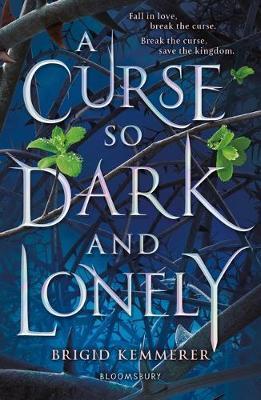 Surprise ending!
A Curse so Dark and Lonely by Brigid Kemmerer is one of the best fairy tale retellings that I have read.
The writing demanded my attention from the first chapter and each chapter ends in a bit of a cliffhanger! I had to force myself to stop reading to go to bed. Harper is kidnapped but for reasons that are different from what she ever expected. She’s been kidnapped from Washington D.C. to help break a prince’s curse. Prince Rhen and his top guard, Grey, are the only two that know about the curse and the secret that Rhen is horrified about. Lilith cursed Rhen years ago and he’s turned into a violent monster every season since. Once he changes, he has no memory or control, and because of that he’s ending up killing the royal family, his family. Harper doesn’t like Rhen at first but she understands him better the more she gets to know him. Grey is an intimidating guard but a kind and caring soul. Each season, Rhen becomes a different creature but he’s always violent and ruthless. Harper helps Rhen and his kingdom by pretending to be a princess. A cruel ruler threatens to take over the kingdom and Harper and Rhen tell her that the princess’s father is sending reinforcements to stop her. Rhen, Harper and Grey continue to work together and become closer. This story is full of action, loyalty and bravery and ends in an intense surprise, 5 stars!