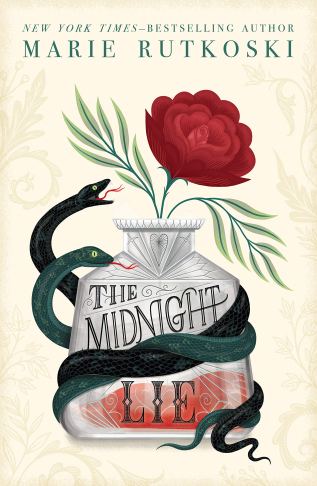 More than what I expected!
The Midnight Lie by Marie Rutkoski tells the story of Nirrim, an orphan that lives with other women that don’t have anywhere else to go. They all live under the care of Raven, who treats them like money-making slaves. Nirrim found and captured a priceless bird and was put in jail where she meets Sid. They talk back and forth but they’re in separate cells and low light, so they can’t see each other clearly. Somehow Sid gets them both released and Nirrim is surprised to find out that Sid is actually a woman when she thought Sid was a man during her stay in jail. Sid is a traveler, which is rare in Nirrim’s kingdom. The two befriend each other with a wary trust. The two travel together until a visitor brings Sid worrisome news and she has to return to her home. Then all Nirrim wants is the truth behind the history of her kingdom. What she discovers is much more than she bargained for. The ending left me speechless and was so much bigger than I expected it to be! Different types of abuse and manipulation are touched on as parts of Nirrim’s life. I appreciate the author addressing these issues and helping readers understand the perspective of the abused and used. A complex world with complicated characters, 5 stars!