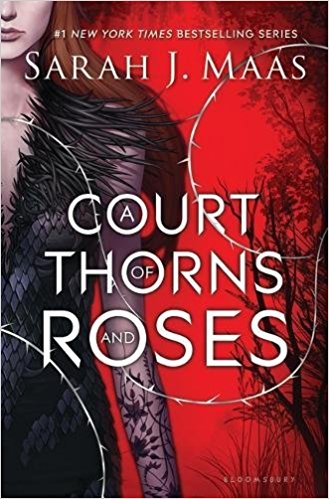 A Court of Thorns and Roses by Sarah J. Maas tells the story of nineteen-year-old Feyre (pronounced fA-ru).  She is the youngest of three sisters, living in a small shack with their father. Their mother died eleven years ago when they were still well off. Since then, their father has been somewhat crippled and the family has lost everything. Feyre hunts and takes care of the family when no one else will. The eldest sister Nesta is a snooty brat and Elain, the middle sister, doesn’t seem to think herself capable but she’s much kinder than Nesta. Unknowingly, Feyre kills a High-Fae. He looked like an oversized wolf and she felt like her family could benefit from its pelt. A large beast shows up at Feyre’s family home looking for retribution and offers her the choice of death or to live in Prythian with the High-Fae. She chooses to live. It takes two days to get to the beast’s home and Feyre is treated as a guest. Tamlin, the shape shifting beast, makes sure to care for Feyre’s family so she won’t worry about their welfare. He also changed their memories of Feyre being taken into something pleasant. Eventually, Feyre becomes comfortable in Tamlin’s home and they build their acquaintance into something more. The faerie world is being threatened and Tamlin worries about Feyre’s safety, so he sends her home. Trouble compounds from that point. This is a love story, reminiscent of a Beauty and the Beast fairytale, with strong characters. I especially like Rhysand with his cunning, clever personality. A wonderful beginning to a riveting fantasy series, 5 stars!