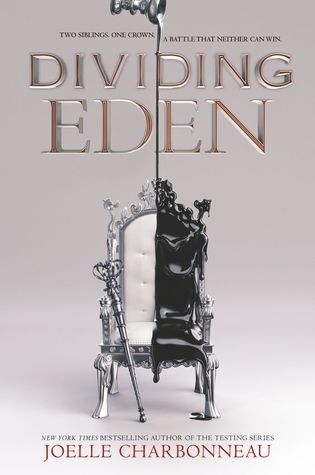 Dividing Eden by Joelle Charbonneau is an intense fantasy adventure. Carys and Andreus are royal twin siblings hiding a secret from the kingdom. When the power outage overwhelms Garden City, chaos follows. Andreus helps fix the outage problem right before their brother Micah and their father, the king, are brought home from the warfront by the King’s guards. Both Micah and the king have been killed and the only witnesses to their deaths are soon killed also. The secret the twins are hiding is the sickness Andreus suffers from; it causes him weakness and is supposedly the curse that the seer prophesied after the birth of the twins. The Elders have set up a tournament for Andreus and Carys to compete against each other for the throne, since both the king and his heir are dead. The winner will be the new ruler of their kingdom. They compete unwillingly and try to make the tournament go in favor of Andreus. The danger builds and the suspicion grows stronger as Andreus and Carys struggle to learn who they can trust. It saddened me how quickly Andreus believed that his worth was above everyone else’s. I love the ingenious, clever way the story is told with the alternating points of view of Carys and Andreus and how they overlap at times. This way of telling the story makes the reader’s emotions take a roller coaster ride. I would love to see a map in the sequel and I give this book 5 stars for the adventure and intrigue!