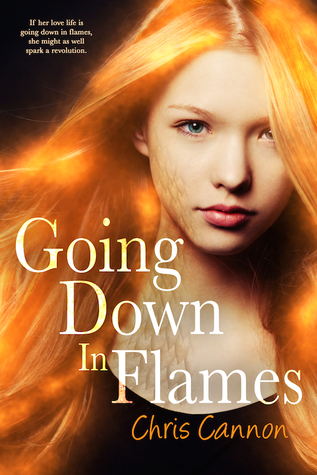 Thanks to NetGalley and Entangled Publishing for the ebook of Going Down in Flames by Chris Cannon! Going Down in Flames is the first book in a trilogy about dragons. Bryn discovers that she is a dragon on her sixteenth birthday and, if that’s not enough, she is told by her parents that she will be shunned by other dragons because they cross-bred. Bryn’s father is a Red Dragon and her mother is a Blue Dragon. This makes Bryn a mix. Cross marriages are forbidden, so when her parents fell in love with each other, they ran away from dragon society because they felt as though they had no other choice. Bryn is forced by the Directorate (the governing organization of Dragon society) to attend dragon school and is placed in the Green Dragon dorms in exchange for letting them “study’ her scientifically. Bryn’s life is threatened more than once, conspiracies fly and new acquaintances are made and friendships are built. Going Down in Flames is a fun beginning to a series with a lot of potential!